For those that don't know me, I am a 45 year old male, have been trying to make a career for myself out of my love and knowledge of computers; have been a musician since age 14 playing bass and drums and singing. I'm single and have been for so long now I can't remember what it feels like to be with someone else, but that's OK because I've enjoyed being single for almost as long. No other bullshit to deal with except your own!

The first pic below represents a time in my life when I think I was probably the least prosperous, but ironically the happiest. (Or at least the most content) It also represents what I was basically doing for a living at the time. Because of career responsibilities, I had to stop completely for a more than a few years, then just never found the right people here to play with, but really didn't look too hard either. Ironically, it was my best friend Duane (who fancies himself a bass player) who got me back into playing again.  He got me to do a Lordi tribute for halloween back in '06. Costumes, music, stage show and all. (check it out on the music page) 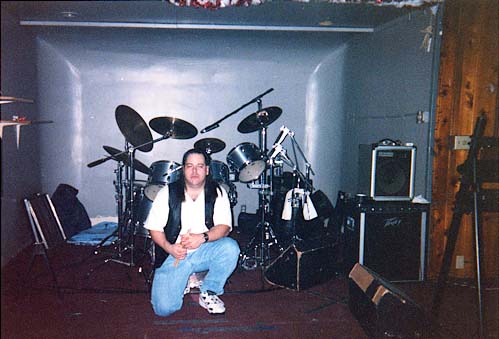 Well, I have since then I've gotten back into playing again somewhat seriously. I've auditioned/played with a bunch bands since then, the first one actually gigging every weekend, lasted almost 6 months before the personality conflicts began to set in; the second lasted almost 10 weeks until I started to express some ideas of my own and they didn't even get listened to; to the third one who are probably the second best band as a whole I've ever played with, but are so fucked up in the head that I just don't care to deal with them ever again; to a band i literally stumbled upon that was a heavy harmony, very eclectic type of band that I can't really put a label on - country, blues, rock and a little jazz and jam band in there as well. Again, personality and professional differences just wouldn't allow us to play together for more than a few months. Again, really too bad as it was one of the better original bands I had been in. I then joined a 70's AOR tribute band who I really thought had their shit together. Well, appearances can be deceiving as it turned out they sure didn't. Complete amateurs passing themselves off as semi-pros.

Goes with the territory I suppose; just very frustrating putting in the effort to have it be for nothing.

I have been playing in one band exclusively now for about a year and a half. This band, ironically, turned out to be the one that has grown and continued to be fresh and fun and worthwhile, when I initially joined to just try something different and didn't really care one way or the other how it went.

Joe Getty and the Dead Flowers is a roots rock, country-ish, folksy type of band, with some raunchy rock and roll for good measure. All original music, written by Joe Getty and Richard Austin. Some really cool stuff that defies description. You have to hear it for yourselves. Check the links on the LINKS page or under under the bands page if really interested.

Here's a more recent pic for reference... which is only about 9 months old now. Taken at a recording session for The Dead Flowers in the spring of 2010.

The only thing that's changed in the time between the first picture and this one, is that although my hair is pretty much the same length, there is less of it,  and my waistline is wider now. 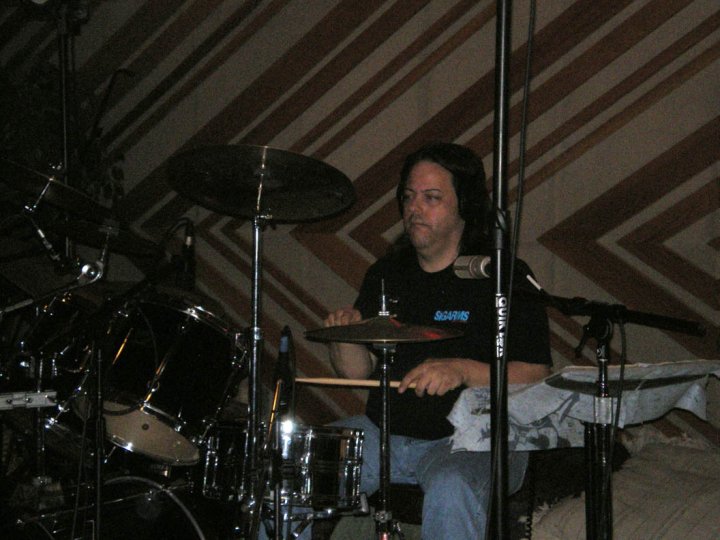 I've been unemployed more often than not in the last decade of my life and I really don't know why other than I don't have papers saying that I know how to do what I know how to do. Frustrated is understating the feeling I've had for more years than I can count it seems, but, I am thankful for what I have. It's a lot more than a lot of people in this world, especially at this more than fucked up time in our history.

I was hired by IBM as a contractor back in April of '09 working for HealthNet as a Desktop Support Tech for an initial 12 month contract, which got extended to 18 months and a few weeks, but was finally not renewed due to the completely fucked up California labor laws. I learned a lot and made more than a few friendships in the time I was there and have missed it since I was laid off back in November of 2010.

So I am looking for full time employment once again.

Anyone need a semi-pro level drummer or a pro level PC/Network Tech?